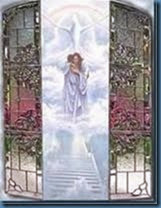 The Gates of  Heaven

An American,  a Scotch and  a Canadian were killed in a car accident.They arrived at the Gates of Heaven where flustered St Peter explained  that there  had been a mistake.

“Give me $500 each,” he said” and I’ll return you to earth,as if the whole thing never happened.”

“Done!” said the American.   Instantly he found himself standing unhurt near the scene.

“Where are the others?”asked a medic.

“Last I knew ,”said the American,“ the Scot was haggling price, and the Canadian was arguing that his government should pay.”